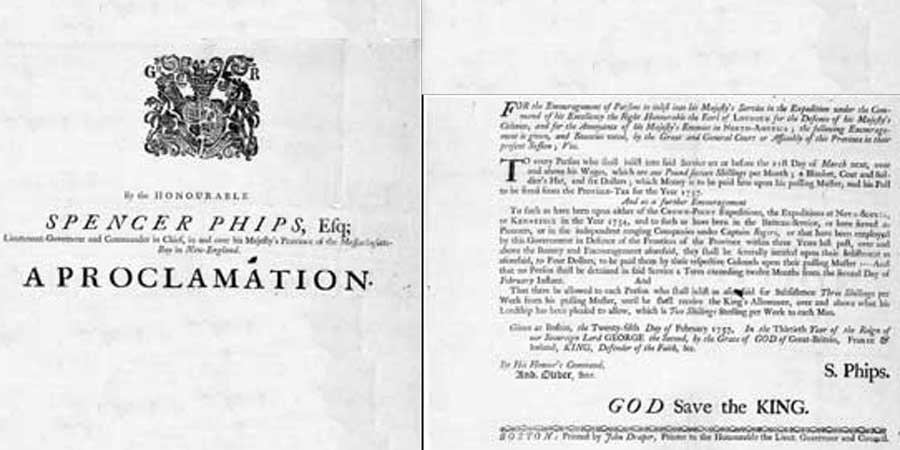 Phips Proclamation
Boston, 1757
“A PROCLAMATION
Whereas the Tribe of Penobscot Indians have repeatedly in a perfidious manner acted contrary to their Solemn Submission unto his Majesty long since mad and frequently renewed. I have therefore at the desire of the House of Representatives with the Advice of his Majesty’s Council thought fit to issue the Proclamation and to declare the Penobscot tribe of Indians to be Enemies, Rebells, and Traitors to his Majesty King George the Second.

And I do hereby require his Majesty’s Subjects of this Province to Embrace all opportunities of pursuing, captivating, killing and Destroying all and every of the aforesaid Indians.

And whereas the General Court of the Province have Voted that a bounty or Incouragement be granted and allowed to be paid out of the public Treasury to the Marching Forces that shall have been employed for the Defence of the Eastern and Western Frontiers from the first of the twenty-fifth of this Instant November –I have thought fit to publish the same and I do hereby Promis that there shall be paid out of the Province Treasury to all and any of the said Forces over and above their Bounty upon inlistment, their Wages and Subsistance the Premiums or Bounty following viz.

For every Male Penobscot Indian above the Age of twelve years that shall be taken within the Time aforesaid and brought to Boston Fifty Pounds.

For every Scalp of such Female Indian or Male Indian under the Age of twelve years that Shall be killed and brought in as Evidence of their being killed as aforesaid, Twenty pounds.

Given at the Council Chamber in Boston this third day of November 1755 and in the twenty ninth Year of the Reign of our Sovereign Lord George the second by the Grace of God of Great Britain France and Ireland King Defender of the Faith.

S. PHIPS  By his Honour’s Command, J. WILLARD, Secry. God save the King.
Resolved That there shall be allowed and paid out of the Public Treasury to any Number of the Inhabitants of this province, not in the pay of the Government, Who shall be disposed to go in quest of the Indian enemy, & shall before they go signify in Writing to the Chief Military Officer of Yt. part of the Province from which they shall go, their Intentions, with their names the following Bounty Vizt. For every Indian Enemy that they shall kill and produce the Scalp to the Gov. & Council in Evidence, the Sum of three hundred Pounds.
For Every Indian Enemy that shall Captivate & deliver to the Governor & Council, the Sum of Three hundred and Twenty pounds.
Also, –Voted, That the same allowance be made to private Persons who shall captivate or kill any of the Indian Enemy which is made to soldiers on the Frontiers of the Province.

GOD Save the KING.