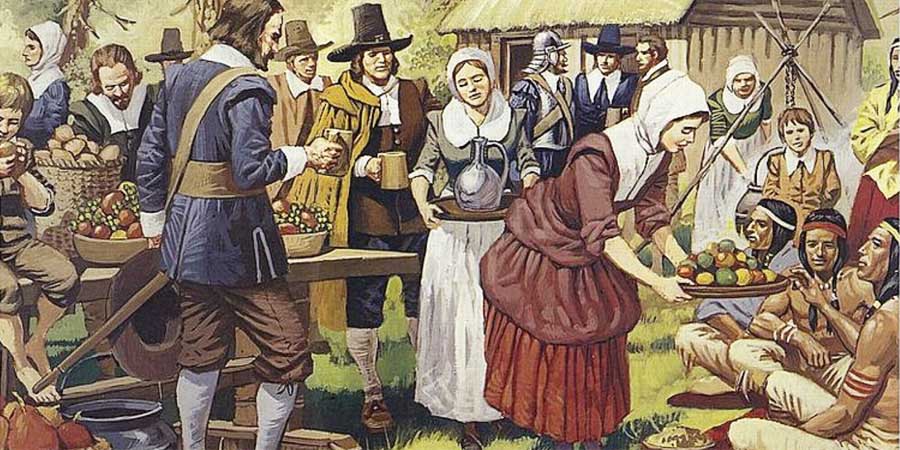 I n truth, massacres, disease and American Indian tribal politics are what shaped the Pilgrim-Indian alliance at the root of the holiday.
The myth is that friendly Indians, unidentified by tribe, welcome the Pilgrims to America, teach them how to live in this new place, sit down to dinner with them and then disappear. They hand off America to white people so they can create a great nation dedicated to liberty, opportunity and Christianity for the rest of the world to profit. That’s the story—it’s about Native people conceding to colonialism. It’s bloodless and in many ways an extension of the ideology of Manifest Destiny.

What are the most poignant inaccuracies in this story?

One is that history doesn’t begin for Native people until Europeans arrive. People had been in the Americas for least 12,000 years and according to some Native traditions, since the beginning of time. And having history start with the English is a way of dismissing all that. The second is that the arrival of the Mayflower is some kind of first-contact episode. It’s not. Wampanoags had a century of contact with Europeans–it was bloody and it involved slave raiding by Europeans. At least two and maybe more Wampanoags, when the Pilgrims arrived, spoke English, had already been to Europe and back and knew the very organizers of the Pilgrims’ venture.

Most poignantly, using a shared dinner as a symbol for colonialism really has it backward. No question about it, Wampanoag leader Ousamequin reached out to the English at Plymouth and wanted an alliance with them. But it’s not because he was innately friendly. It’s because his people have been decimated by an epidemic disease, and Ousamequin sees the English as an opportunity to fend off his tribal rebels. That’s not the stuff of Thanksgiving pageants. The Thanksgiving myth doesn’t address the deterioration of this relationship culminating in one of the most horrific colonial Indian wars on record, King Philip’s War, and also doesn’t address Wampanoag survival and adaptation over the centuries, which is why they’re still here, despite the odds.