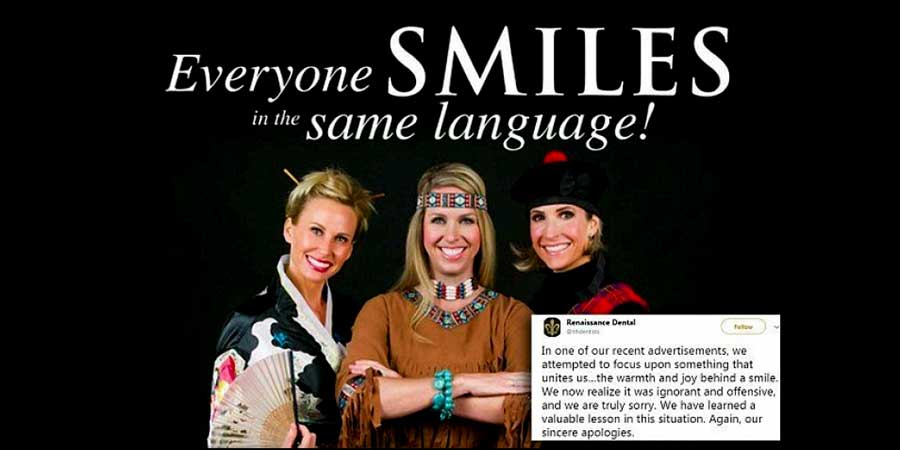 What Exactly Is Cultural Appropriation?

Cultural appropriation is more than the continuation of the colonializing process and racist behavior. It not only is a part of white supremacy but reinvents it. The attitude of “What is mine is mine and what is yours is mine” is a one of the tools of genocide. (note: The above image was also posted by Reddit and the Washington Post and was accompanied by an apology that is at the end of this post.)

Cultural appropriation manifests itself beyond appropriating native practice and culture but also appropriating customs and practices from any marginalized racial group. It proliferates in white dominated countries with a wide range of seemingly innocent and even sometimes respectful intention. But intention is radically different from outcome.

Today cultural appropriation, although sometimes seemingly more benign, includes a wide range of practices often that intersect with micro/macro aggressions. An obvious example is an all white gathering of people celebrating the Day of the Dead or having a margarita “because its Cinco de Mayo”, while at the same time applauding the atrocities on the Mexican border.

Cultural appropriation includes white people with dreadlocks or box-braids, (yes a lot of cultures use braids but each have some distinctive ethically appropriate style) or Kwanzaa, and even some zen or yoga practices. Imagine what it would feel like to Catholics if the Unitarians decided to often dress their minister in papal garb and conduct a high mass with all the sacraments. And note that this example is about varying religious practices within white culture not by one oppressor group usurping practices of the oppressed.

There is a fine and confusing line in this behavior. Eating tacos or Thai food is different from a person of European decent opening an “authentic” Chinese restaurant. Cultural appropriation can continually reinvent itself in surprising and confusing ways. In 2018 a new term was coined on social media called blackfishing” for when white people, particularly women, pretend to be black, like a Rachel Dolezal complex. (see The White Instagram Influencers Pretending to Be Black: ‘My Style Is My Own’). Looking at these sites it would be easy to assume that the women were black, even when they self identify as white. While their intention probably is to encourage and celebrate distinct cultural practices, it still can be very demoralizing for people of color to interact with this behavior. Even something as liberal as “multiculturalism” can feed into this aspect of racism. The concept of the US as a melting pot is about what is able to rise to the top and subsume everything else; i.e. white supremacy. ~rch

By Joshua Rhett Miller May 10, 2018
“…The Raleigh-based dental center apologized early Thursday for the advertisement, saying it tried to focus on something that everyone could relate to – “the warmth and joy of a smile” – but admitted it missed the mark.

“We now realize it was ignorant and offensive, and we are truly sorry,” the company tweeted. “We have learned a valuable lesson in this situation. Again, our sincere apologies….

“The most important thing I have to say is how very sorry I am that an offensive ad was published,” publisher Connie Gentry told The News & Observer. “In hindsight, it’s obvious that this ad was in poor taste and should not have been allowed. I’m truly sorry that this mistake was made; it simply never occurred to the team at Renaissance Dental or our team at Midtown that the ad would be perceived as anything other than how it was intended.”

Another example is the One Shot Antelope Hunt

Since the first hunt in 1940, the One Shot has become world renowned and has been the spawning ground for several other similar events in the both North America and Africa. … In the evening an impressive Indian Ceremony is held in the which the hunters hear the “Legend of the Hunt” and are made blood brothers of the Shoshone Indian Tribe. Each hunter is given an Indian Name, which usually corresponds to his vocation. He is also given a sacred Indian Medicine Bag and his bullet is blessed for the hunt.